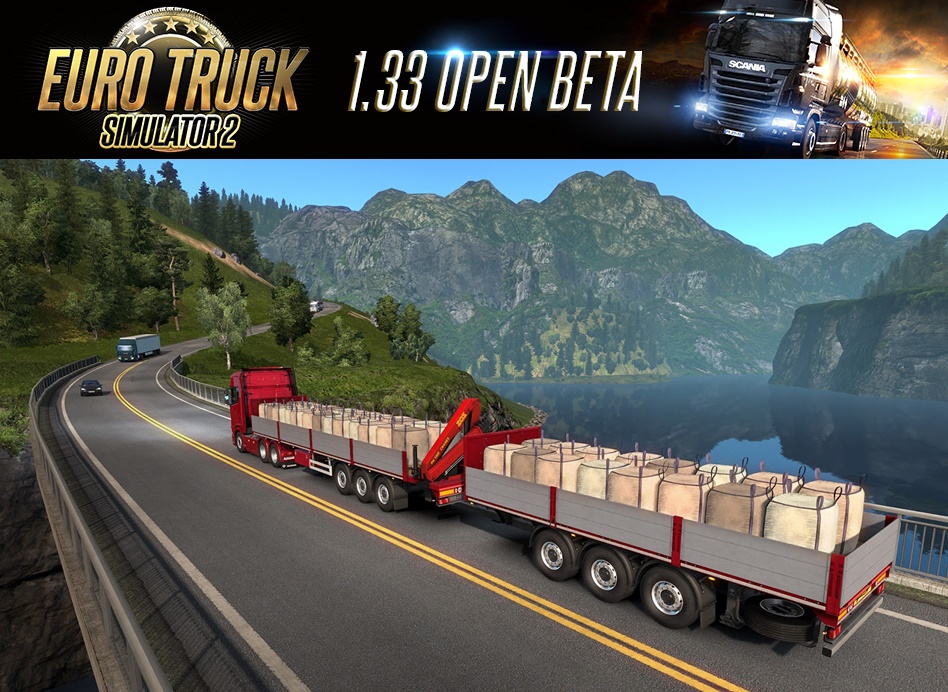 A part of our hard-core fan community has been asking us for ages to involve them in the testing of our games,
to allow them to see under the lid sooner. Last week, we decided to do a little trial
and released an Experimental Beta of ETS Update 1.33.
This was a build of the game which was not yet deemed stable enough for a large-scale public beta release,
but having more feedback based on it would be a benefit for us to identify potential issues
faster with more eyeballs on the new features. We only announced it on our forum and hoped for the best.
The volume of feedback has proven that this was a successful experiment, spotting certain issues this early has definitely helped us a lot.

With this experience, we may consider adding another step to our regular testing progress.
We are always starting with internal betas, and continue first through a closed beta test with our
much-appreciated stable cadre of trusted volunteer testers. Now the new step may be a still-raw
experimental beta for the most daring of you before we reach the widely publicized open beta release ahead of the final game update.

Thanks to everyone involved in the experimental beta, we are now able to launch
the ETS2 Update 1.33 Open Beta sooner than anticipated!

This update brings some long requested features, as well as some of the most desired trailers.
The double flatbed is the first of them, now with an option to be converted to a container trailer.
With that also comes the Krone Boxliner, for owners of the Krone DLC.
Another highly demanded addition is the brick trailer - a great white whale amongst trailers - which can be added to your fleet now.
That will, of course, rob you of the joy of "hunting" this one on the freight market - the choice is yours :) 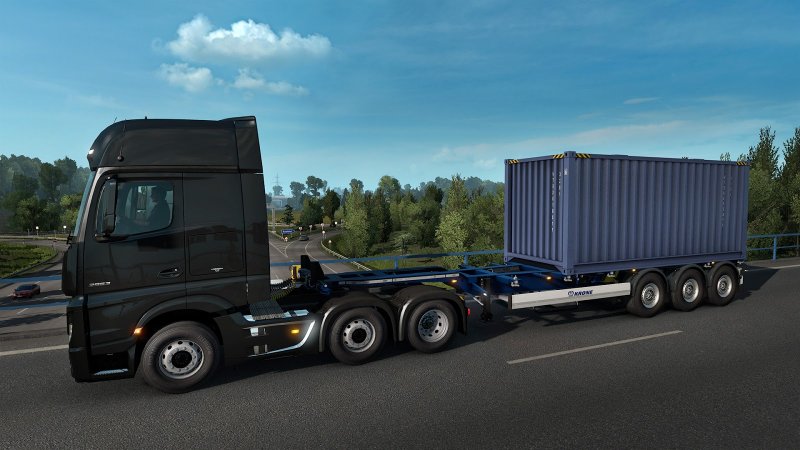 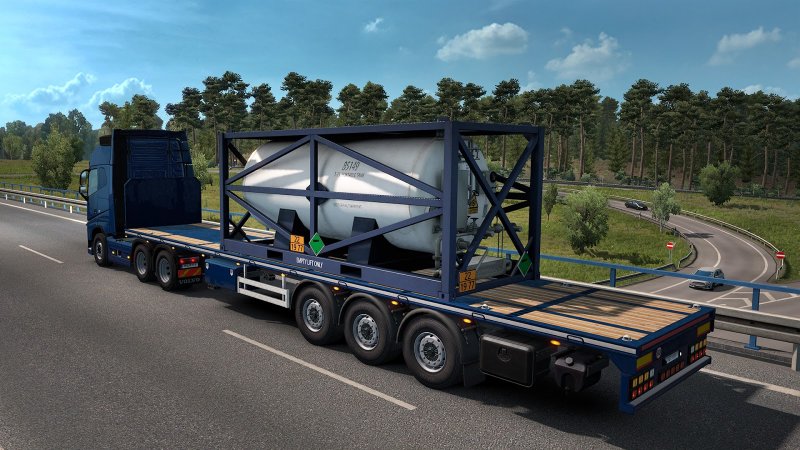 The system changes also bring certain features eagerly anticipated for quite some time.
Generally the most important is the option of Steam cloud-based profile. No more profiles lost or deleted by mistake!
No more need for keeping profiles stored on a flash drive for those playing on more than one PC!
While this function needs some more testing, we hope to give you a safe place to store your profiles pretty soon. 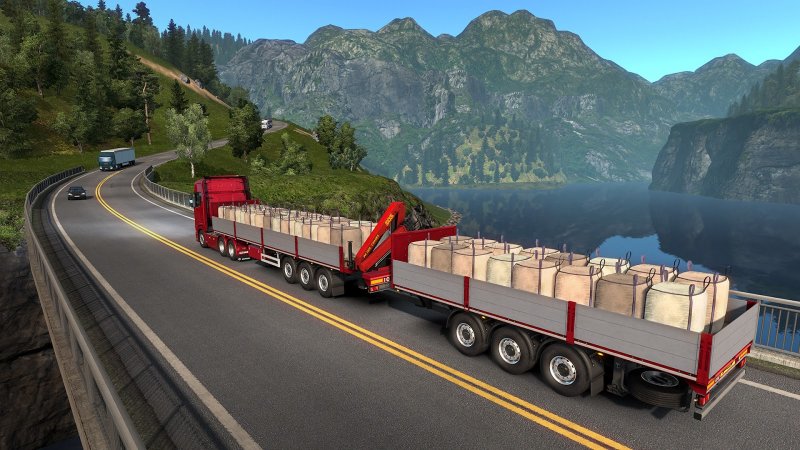 Last but by no means least on the list of requested functions, we give you reusable truck and trailers configuration templates.
This feature should make life easier, or so we hope, for everybody - but especially those who like
to have a completely unified fleet of heavily modified trucks. We're sure that owners
of fleets consisting of dozens of trucks and trailers would agree :) 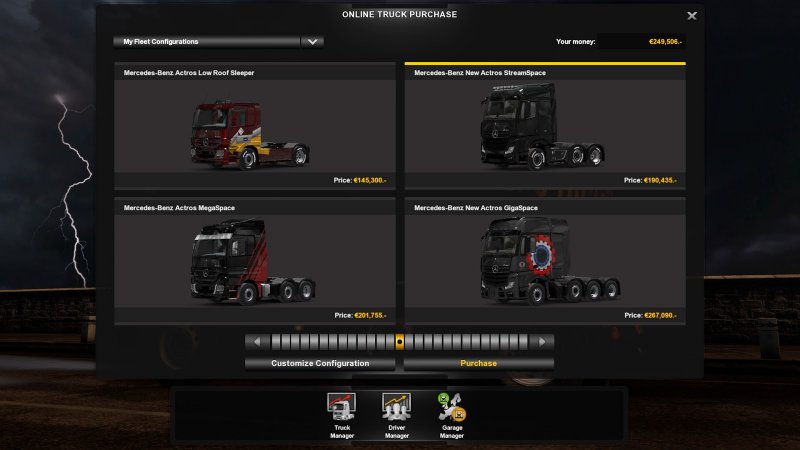 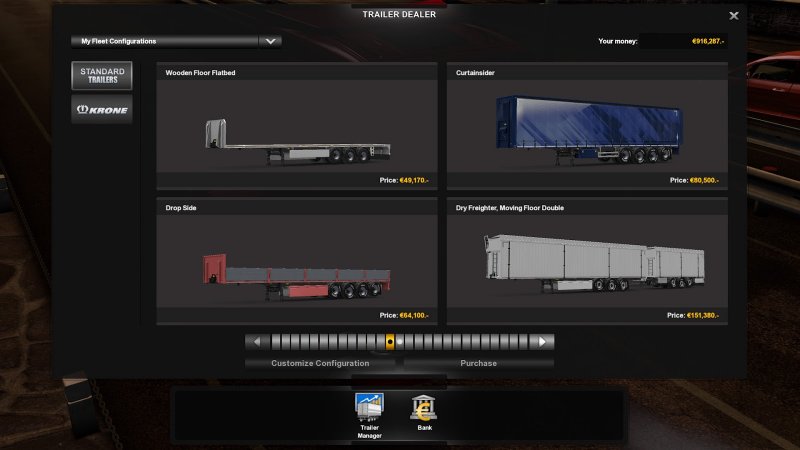 And the additions don’t stop there. Rain is said to have a calming Zen effect (a lot of our players are after
the soothing experience of just driving through the cool countryside in our games), so to improve this effect,
we improved the graphics effect of rain. Raindrops on the glass should behave more realistic now.
Speaking of the driver's point of view, you should feel (and see) the improved physics right after you start your truck.
The center of gravity for almost everything in the game was tweaked, along with suspension, damping and braking.
We are trying to find the right balance to make driving enjoyable for users of steering wheels and gaming
controllers, as well as for players just using the keyboard. Driving your rig should feel different now, hopefully for the better.
The newly added music shuffling may also help in this.
To close the list of important changes, we've added a cvar for people having issues with blinking lights.
Try different settings with writing g_disable_beacons 0/ 1/ 2 in the console.
We hope that one of these will suit you well.
So enjoy all the new additions, but please remember: It's only an open beta, not a stable
public version - so you may encounter bugs, instability, and kinks. It's completely okay if you want to
wait for the final release. But if you're interested in helping us to move there faster, we'll appreciate
all of your feedback on our forum and your bug reports in this section.
If you wish to participate in the open beta, you can find this version in the public_beta branch on Steam.
The way to access it is as follows: Steam client → LIBRARY → right click on
Euro Truck Simulator 2 → Properties → Betas tab → public_beta → 1.33 public beta.
No password required.
CHANGELOG:
Double flatbed trailers (Scandinavia DLC required)
Buyable container and brick trailers (flatbed variants) and cargo market
Steam cloud based profiles
Reusable truck and trailer configuration templates
Physics improvements (suspension, damping, braking, COGs)
Rain drops behavior on glass improved
Music shuffling
Country and city name localization settings
g_disable_beacons (for people having issues with blinking lights, 0/1/2)
Krone Boxliner ownable (Krone DLC required)
MOD ALERT:
Due to the number of changes, most mods will need some work to catch up!