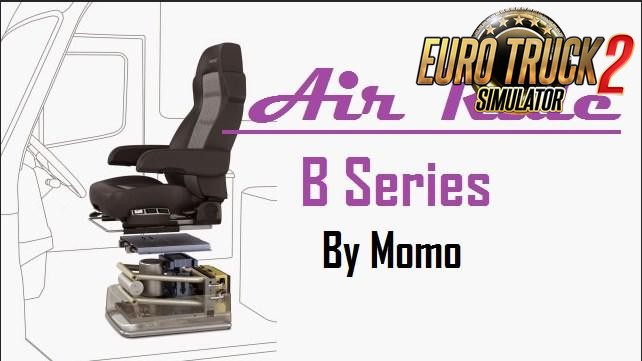 Download mod Air Ride B2 v1.0 by Momo (1.36.x) for ETS2 | Euro Truck Simulator 2 game.
This is the second Air Seat of the B series. This particular B2 used to serve as an exclusive air seat for my Physics 7 mod before I decided to deleted Physics 7 because since the game patch 1.35 with the new physics slider bars introduced in the game option allowing the player to adjust the physics to achieve the same or similar result as any physics mod, so I feel that physics mods are no longer necessary for ETS2 and ATS. However the air seat mods are still important.
With Physics 7 gone, some players still miss its exclusive air seat. So I took the seat from Physics 7 and repackaged it into a separate mod as a second edition of the Air Ride B series. So here it is Air Ride B2.
As the name suggests, it is pretty much similar to her older sister the first Air Ride B. But this younger sister B2 tends to bounce less than her older sister. You should try and compare which one between the sisters you like better. If you love them both and cannot dump any of them, well, you may use both of them, but only one at a time.
COMPATIBILITY
- SCS does not seem to change the core of the seat through patches. So this mod and all my Air Ride mods should survive many patches to come.
- Compatible with any physics mod but this mod should be higher.
- Compatible with all trucks, but this mod should be higher.
Tested on game version 1.35.x, 1.36.x
Screenshots Mod

- download the mod «Air Ride B2 v1.0 by Momo (1.36.x)»
- use WinRAR or 7-zip and unzip the archive;
- copy the file with the extension .scs in My Documents/Euro Truck Simulator/mod folder
- start the game, go to your profile, see the Mod manager and activate the mod.
Tags: Ride Momo
Download from our server:
[attachment=2362:air_ride_b2_1_0.rar]