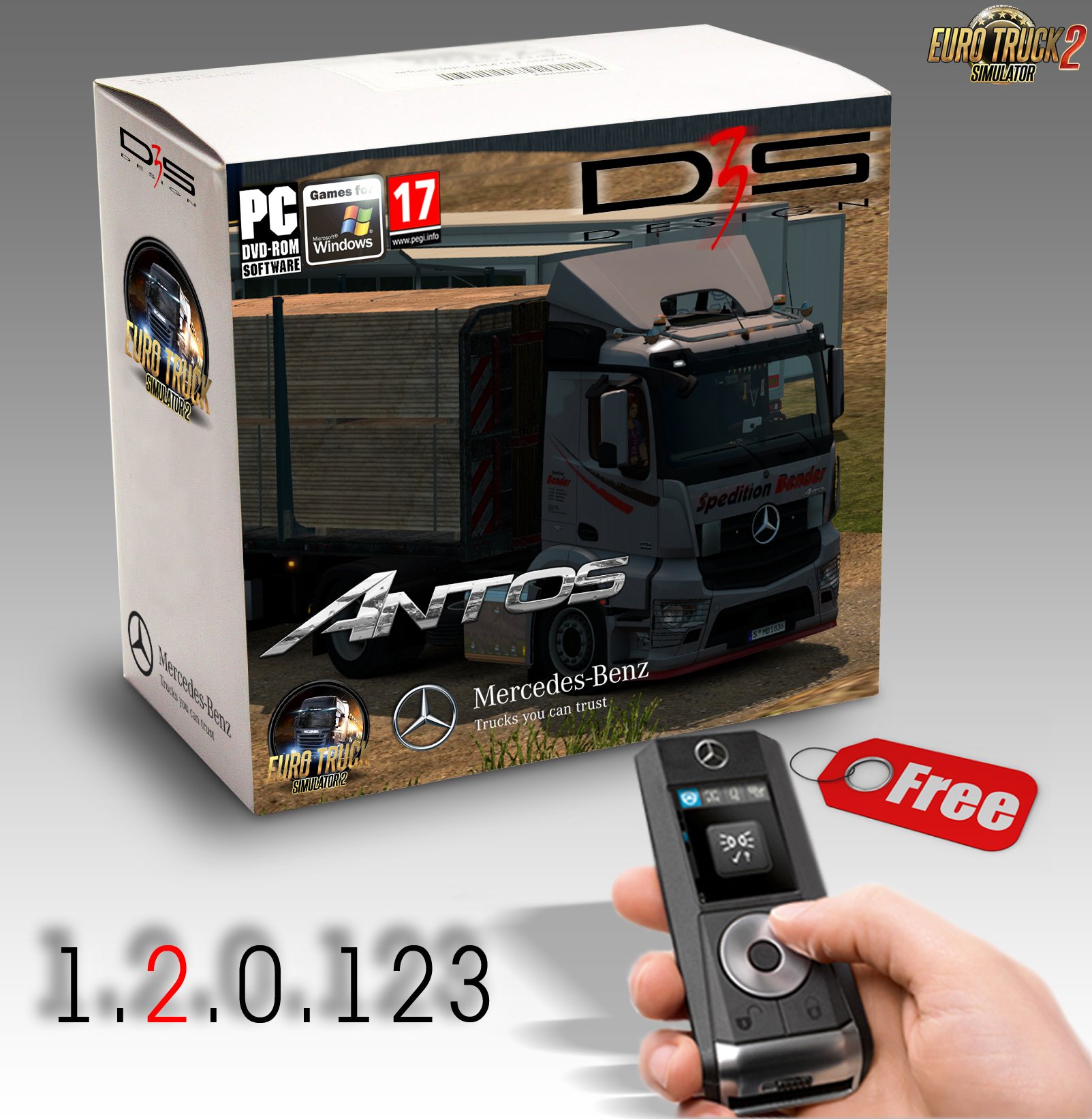 D3S Mercedes Antos '12 v1.2.0.123 for Ets2 1.28.x game version
Features:
-approved for patch version 1.28.x
-The structure of the mod
-Inboard computer corrected air and oil pressure sensors
-Reduced LED lighting on side skirts and truck cabin
-moved (previously edited) previously missed pmg files
-The assortment of BDF-cargoes has been expanded
-And also corrected other minor errors due to the transition to a fresh game patch.
Patched: 1.28.1.3.steam
New version 1.2.0.123:
- fixed all sounds
- added wheels
- added windscreen options
- added chassis 26t, 6x2 DNA Low frame (nR) 5200
- added chassis 26t, 6x2 ENA Low frame (nR) 5200
- added a trailer Schmitz SCS.Mega for chassis 4x2 Low frame (nR)
Author: DANZ, [D3S DESIGN]
Fashion Adaptation: dobr4060
Installation:
From the downloaded archive, the files of the .scs format are copied to your mod folder,
connected to the mods manager, with the replacement / deletion of ALL files
(if the mod was already installed) of the files of the earlier version.
1 D3S Mercedes Antos '12 v1.2.0.123 r1.28.1.3 - base file (required for connection)
2 D3S Cargo BDF 1.28.1.3 - file for working with BDF trailers on the BDF chassis \ tandems (addition to the base file)
3 D3S Route Advisor Marker 2.0.123 - the file replaces the standard (default) route token in the
on-board GPS navigator, on the maps and in the Route Advisor - connected at will.
When changing to a new version of the mod, complete the delivery of the cargo, as the truck
will be moved to the base garage. You do not need to remove the tuning and resell the truck.
Attention!!! Important!!!
If you want to deal with the delivery of goods only on a truck tractor, using semitrailers,
then you need only the base file. In this case, only semitrailers will be available in the
menu for selecting cargo for delivery and at base / firm sites. Cargoes can be taken for all
types / types of orders: Direct delivery, Fast orders and WoT contracts. The choice of a
semitrailer for Direct Delivery (by clicking on the "gear" icon in the menu, at the entrance
to the loading) will be only among the semitrailers.
If you are interested in BDF loads, then connect the second file in addition to the first file
(higher by priority). In this connection mode, in order to change the type of transported goods,
simply change to a truck (previously or newly purchased) with a different type of chassis.
No additional connections / outages are required in the Mod Manager. In this mode, you can
work on a semitrailer with semitrailers and tandem, but for a truck tractor through fast orders
(work for a company - a rental tractor) it is possible to drop out instead of a semitrailer - a BDF trailer.
And even in this case, most of the cargoes with such a coupling (a truck tractor + Tandem trailer)
can be delivered and parked without damage. On the sites / bases, both semitrailers and BDF trailers
will be parked. The choice of the type of the semitrailer for Direct Delivery (by clicking on the gear
icon in the menu, at the entrance to the loading) will be both among semitrailers and among
tandem-trailers, the replacement of goods on the site takes place automatically, i.e.
Instead of a semitrailer, a BDF trailer appears and vice versa.
For the tandem are available: Direct delivery, WoT contracts.
In Fast orders there are NO tandems!
For a truck tractor: Direct delivery, WoT contracts and Quick orders with a
possible mismatch of the trailer type for the coupler.
Screenshots Mod 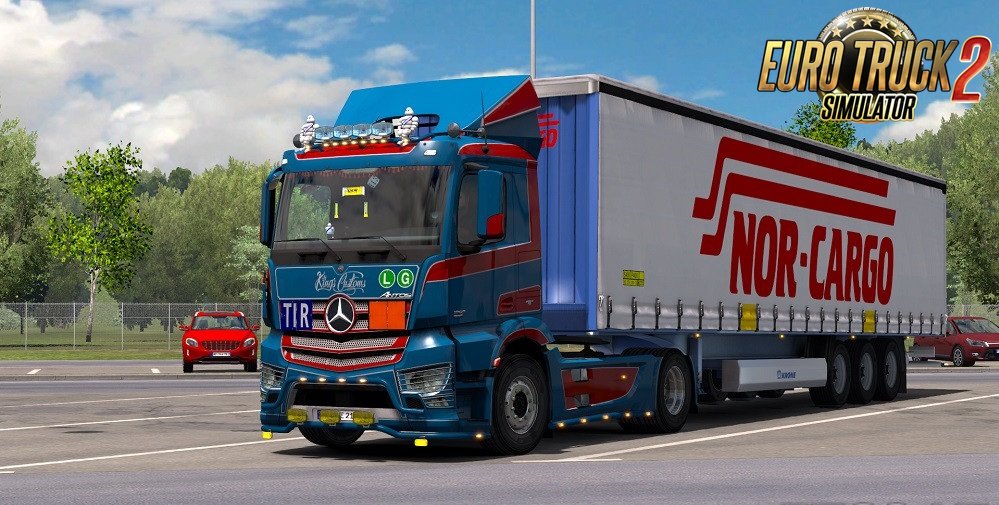 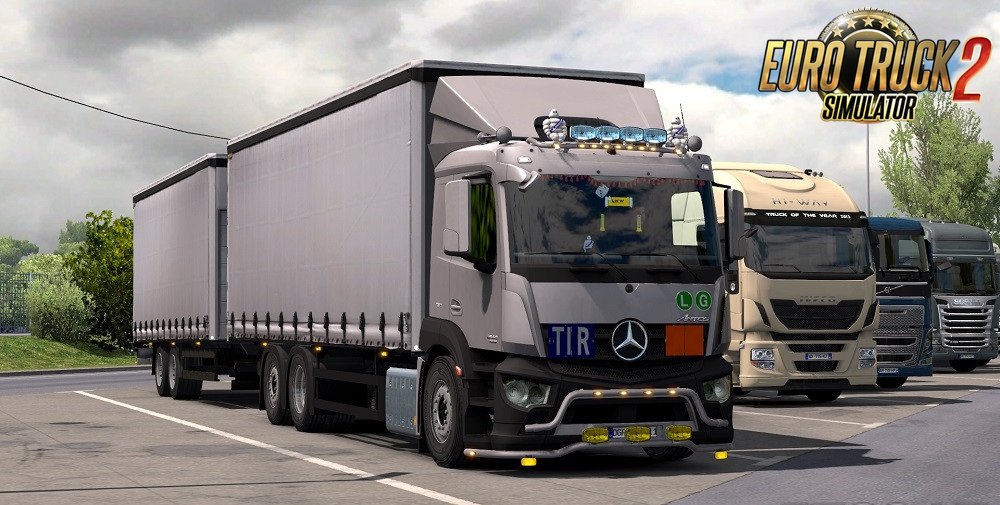