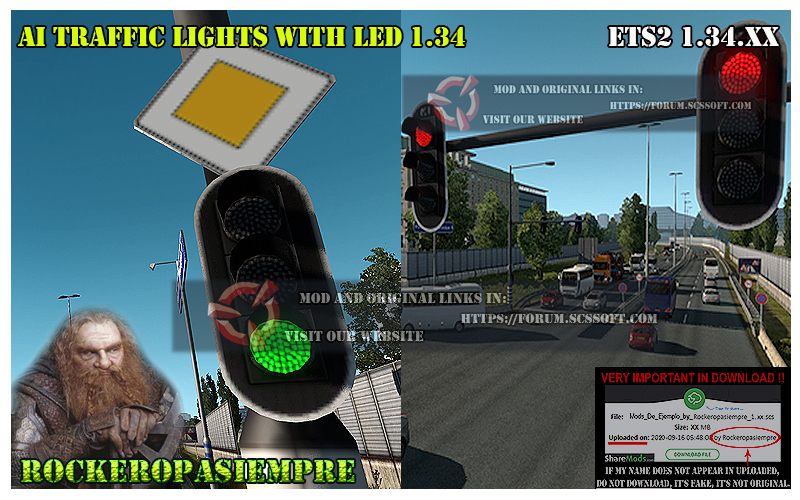 Description about « AI Traffic light with led by Rockeropasiempre 1.34 »

Independent mod.
For requests from some users, I created the independent led signaling mod.
It does not affect any other lighting. No lampposts, no trucks, or any other.

PROHIBITED UPLOAD THE MOD TO ANY SERVER WITHOUT PERMISSIONS.

- Semaphores with leds.
- THIS MOD ONLY AFFECTS THE SEMAFOROS !!. It does not affect any other type of lighting.
- Compatible with all my mods.
- This mod offers the possibility of seeing a number of traffic lights with led lights in different countries of the map.
- Greater visibility at long distances.
- Increased textures quality.
- Higher light intensity of the led traffic lights.
- Traffic lights with leds in all cities: United Kingdom, Belgium, Switzerland, Czechoslovakia,
Germany, Estonia, Finland, France, Italy, Lithuania, Latvia, Netherlands, Russia,
Poland, Slovakia, Hungary ...
- It also includes traffic lights leds, in certain bus stops and temporary traffic lights.
- Added traffic lights leds for the countries included in all the existing dlc's to date.
- Some traffic lights on the map, can not be converted to led, since they belong to the map itself,
and you can not modify this mod.

- download the mod «AI Traffic light with led by Rockeropasiempre 1.34»
- use WinRAR or 7-zip and unzip the archive;
- copy the file with the extension .scs in My Documents/Euro Truck Simulator/mod folder
- start the game, go to your profile, see the Mod manager and activate the mod.
Tags: Traffic light Rockeropasiempre