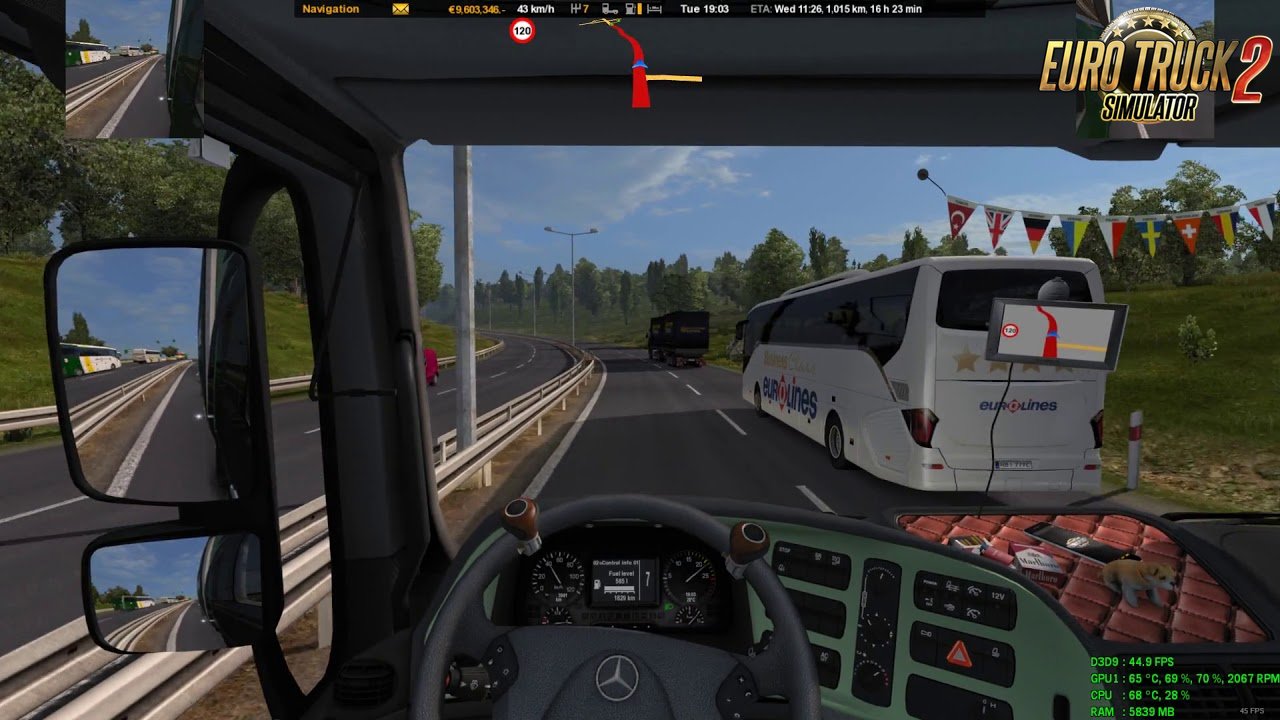 The achievements of my mod are the following:
- very high density in the morning and afternoon, especially on motorways and expressways,

but also in cities with frequent traffic jams (2 maximums at 8:30 and 16:30)
- generally high density on motorways the whole day and reasonable high during the night,

with a minimum at 3 o’clock where still a significant number of vehicles can be spotted
- relatively high density during the day on local roads (1x1) and variable frequency that makes possible overtaking other vehicles;
- low and very low traffic density on local roads during the night
- improved semaphore cycle on all crossroads (2 types of semaphore cycles)
Other improvements:
- increased the duration of yellow after green to 3 seconds on all semaphores (essential to avoid fines)
- reduced the duration of yellow after red to 1 second (avoid fines if leaving too early)
- improved semaphore cycle on roadworks. The duration of simultaneous red on both semaphores is now 12 seconds.

New version 3.0 changelog:
- tweaked daytime values following an algorithm of Tresco
- added ai_avoid_speed rule which should make some cars driving faster than the speed limit
- added remove_distance rules with different values (smaller) for ProMods addon to keep reasonable fps on this demanding map
- removed few outdated rules
- Ai vehicles can overtake on single continuous line on local roads (remove world/road_look.sii if you dislike this rule)
- increased speed on expressways located on cities (70 km/h for cars and 60 km/h for buses)
- added rule max_limit with higher values on all types of vehicles (will not alterate country speed limits)
- included separate add-on for Ai traffic
Ai Traffic add-on for Real Traffic Density v3.0
- cloned SCS police cars with permanent beacon and sound - courtesy of Todor Alin, thanks for a great help and patience. the "on" police cars have sound only during the day and higher speed where there are no local speed limits (remove sound2.sii if you don't want the sound); the country spawn is identical as the originals, few cars added in countries from other maps; originals police cars are not affected in any way by the "clones"
- car and trucks colours from my mod were included in this mod. if you edited that mod, keep it with higher priority than this addon otherwise that mod could be removed from the list
- increased speed and torque of SCS Ai traffic trucks
- increased speed of police cars
- increased/decreased speed of SCS Ai traffic cars for a better discrepancy in traffic

in order to keep the original country speed limits, please note that Ai vehicles will only

- download the mod «Real Traffic Density v 3.0 by Cip [1.28.x]»
- use WinRAR or 7-zip and unzip the archive;
- copy the file with the extension .scs in My Documents/Euro Truck Simulator/mod folder
- start the game, go to your profile, see the Mod manager and activate the mod.
Tags: Real Traffic Density by Cip