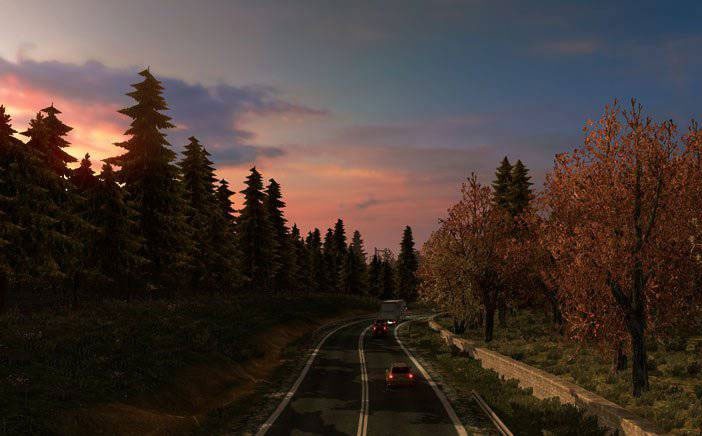 It adjust the summer_time corespoding to that date, and chenge loaded seson mod coresponding to that day.
At first day of the week will be at the begening of the year, with winter mod loaded ,

Before first usage:
– extract all files to DocumentsEuro Truck Simulator 2 folder
– run the game and enable, in mod manager both <> and <> mods. <> must have highest priority ,

then folow the season.scs mod, and after, all others.

Copy the desired season mods(Spring, Summer, Autumn or Winter) or all, over the fake mods in mod folder.
Note: fake mods are those present in this archive)

– remove the rem from the line at bottom of the Season_Changer.bat file coresponding to game version (32 or 64)
– create a shortcut to Seson_changer.bat file to desktop

After all this, all you have to do is to run from created shortcut and enjoy.

Starting from verry good idea of xyzan, I take a step forward.
It compute the day of the year acording to day of the weeak (number of day in week) and the hour (from PC),

because I don’w want to wait a whole year to complete the cicle…
Acording to computed day of the year, it sets the Summer_time and set with season to be loaded.
It simple rename that seson mod to the fake season.scs mod provided in the zip file,

and, because this file was activated in Mod Manager, it will be used by game.
If you don’t have a coresponding season mod, or don’t want to used it,

simple use one of tha fake mod(s) in the archive.
Data is the folder to be used as day of the year changing mod.
An issue that I cannot solve yet is that in game engine tha played time in days is computed with the day_in_year, so,

if the played time is more then a month, the result is strange.

- download the mod «Season Changer [1.23.x]»
- use WinRAR or 7-zip and unzip the archive;
- copy the file with the extension .scs in My Documents/Euro Truck Simulator/mod folder
- start the game, go to your profile, see the Mod manager and activate the mod.
Download from our server:
[attachment=1486:season_changer.zip]