- The mod is independent. You can also combine with my work:
Pack Powerful Engines + Gearboxes ETS2 V.12.4 They work perfectly combined.
If you combine them, you will get a total of 28 engines and 14 gearboxes.

- New sound banks have been built, using the old sound base earlier than version 1.37 of SCS.

- So what is the difference ??

Special attention has been paid to progression sound at RPM. The "TURBO" sound decreases its volume level, making less annoyed its progression. The "MOTOR BRAKE" increases its level for greater immersion.

- 14 Gearboxes: Use the same boxes as my mod Pack Powerful Engines + Gearboxes 12.4.

- Different engine sounds: 17
- 1 sound per Truck brand in the game.

- 14 of the sounds used are from SCS Oficial.

Changes in v1.3:
- Fixed Volvo FH16 sound bank problem.
- New MX-13 engine sound bank for Daf XF105 engines. (Kriechbaum original Audios).
- Improved start and stop sound of Scania R 2009.
- Turbo sounds, adjusted on all engines so that it is barely audible in the cockpit,
and can be heard perfectly when you open the window slightly.
- All engine sound levels, and turbo, were adjusted to the center volume of the level bars. (See the image of optimal sound settings for the truck.).
- The "CLASSIC" attribute was added to the mod's engines to be able to see which engine we have in each truck, within the truck manager.
- Fixed obsolete "sound_retarder" attributes of the retarder sound.

Renault Range T, companion "Kriechbaum". Thanks for the approval, permission, and help.

Man TGX, companion "Leen". Thanks for the approval. A small tribute, for your dedication, camaraderie, and work, during all these years.

THANK YOU "Leen" for everything. I wish you improvement in your health.

Some models include several reverse positions and also several retarder positions.
You just have to read the description of the mod, or read in the store before buying.

With which trucks can I use this mod? BOXES AND ENGINES ARE ADAPTED FOR ALL ORIGINAL TRUCKS IN THE GAME.

Thanks: Robinicus and Kriechbaum for technical support with Fmod.

Important
IMPORTANT:
Tip: If you use this mod, or any other engine or gearbox mod, and decide to disable it
or remove it, before doing so go into the store and assign a game engine and gearbox.
This way you will not have errors in the console in the future.

NOTE: Personally, I DO NOT LIKE engines with unreal power, but like many
you have ordered the old "BRUTAL" engines, I have decided to include them in this pack.
Tested on game version 1.39.x
Screenshots Mod 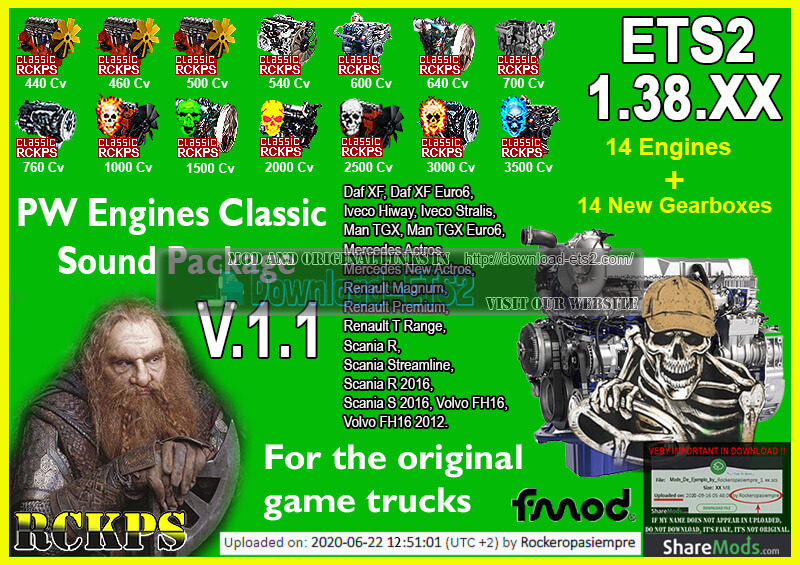 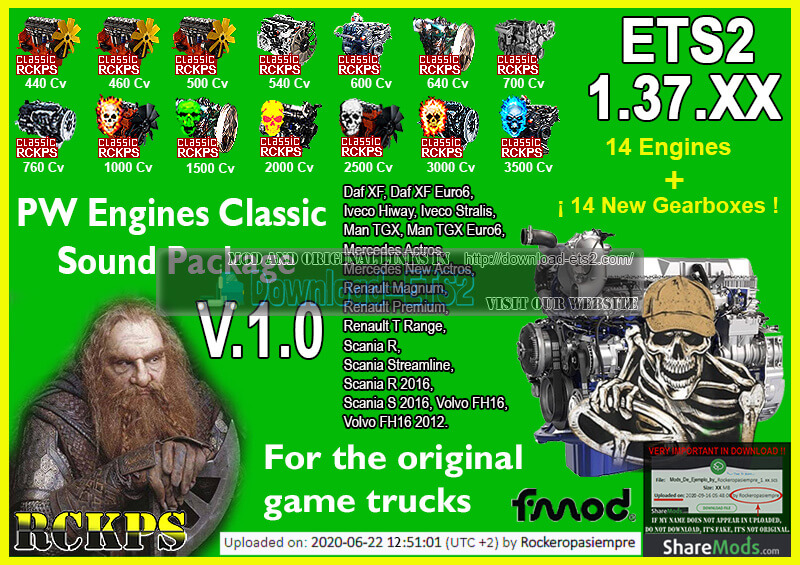