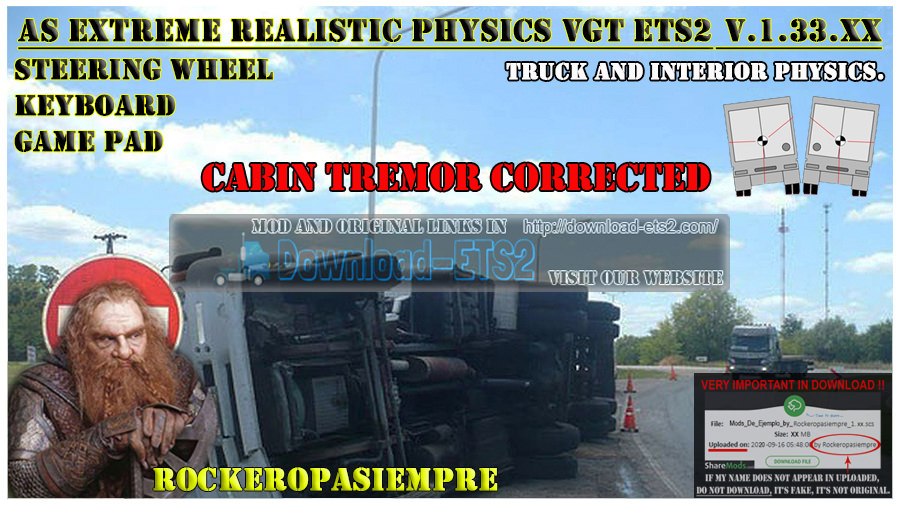 Description about « As Extreme Realist Physics for 1.33.XX Fix »

Update of mod. Due to an error in a file, I had to update this mod again.
The cabin tremor has been corrected. Excuse colleagues.

(TO DRIVE WITH KEYBOARD, GAMEPAD, OR WHEELS WITH 900 DEGREES OR LESS, TURN.)

NOTE: IN WHEELS WITH 900 DEGREES OF ROTATION, THE CONDUIT IS MORE MANEJABLE.

IT IS VERY IMPORTANT TO PROPERLY SET THE ADJUSTMENTS IN THE GAME. OBSERVE THE SAME IN THE IMAGE OR VIDEO.

The mod directly affects the physical behavior of the truck and the interior physics, which make more real the movements of the driver's seat as well as the sensations of braking, accelerating or tilting in curves.
It is configured to be able to use it with Volante, Gamepad and Keyboard.

It affects very directly on the speed at which it circulates. At more than 90 kilometers per hour, it will be practically impossible to master a closed curve, since the direction hardens considerably as we increase the speed.
Therefore, you will have to foresee the speed of entry to the curve as you approach it, as in reality. Once inside if you go past speed, you can not do anything to dominate the curve.
The braking has been modified, decreasing its efficiency depending on the speed and weight of the truck and load. The temperature at which the brakes fail to be effective has been decreased, so if we abuse the brake, we will be without it before.

For a correct operation of the mod, make the necessary adjustments as shown in the video or in the image. In this way you will get a more realistic driving and appropriate to the feeling of speed and handling of the truck.

Changes in this version:

- Updated the necessary files for its operation in the new version 1.33.XX
- Readjust the cabin and driver inclination parameters.
- Fixed cabin tremor.
- Decrease in brake heating efficiency and temperature. (They heat up earlier and lose efficiency)

- download the mod «As Extreme Realist Physics for 1.33.XX Fix»
- use WinRAR or 7-zip and unzip the archive;
- copy the file with the extension .scs in My Documents/Euro Truck Simulator/mod folder
- start the game, go to your profile, see the Mod manager and activate the mod.
Tags: Extreme, Realist, Physics