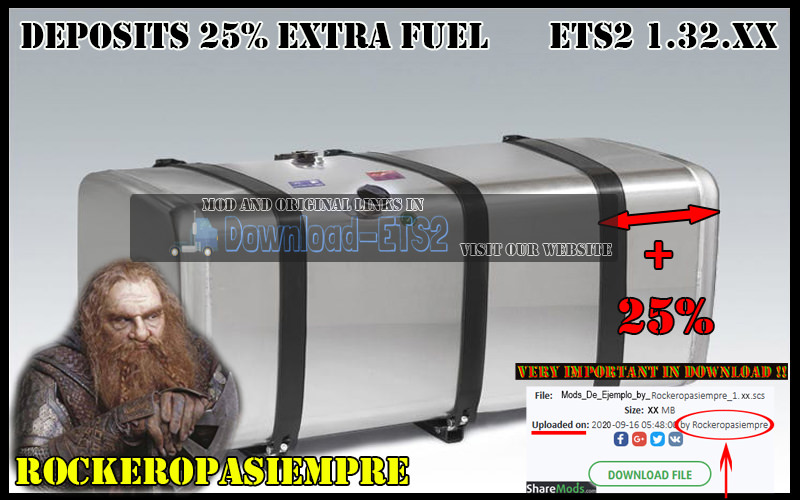 PROHIBITED UPLOAD THE WORK TO ANY SERVER WITHOUT PERMISSIONS.

- Modified the capacity of 105 deposits of the game, adding an extra 25% extra capacity.
- Add the deposits, do not replace them.
- You can use any original chassis of the game, or that of the mod, which is usually always below the original, with a small icon that tells you that this deposit has room for 25% more fuel.
- All the archives of the deposits have been carefully expanded that 25% more fuel mathematically.
- For the trucks of the game that use the AdBlue additive, that 25% has been distributed equally so that you do not run out of additive.
- It also serves for the 8x4 chassis of Scania R 2016 and Scania S 2016.

- Updated to the new version 1.32
- Deleted old files.
- Modified the rest of files.
- Re-adapted the mod icons for the brightness changes of this version.

- download the mod «Deposits 25% Extra Fuel by Rockeropasiempre 2.1 Ets2 V 1.32.XX»
- use WinRAR or 7-zip and unzip the archive;
- copy the file with the extension .scs in My Documents/Euro Truck Simulator/mod folder
- start the game, go to your profile, see the Mod manager and activate the mod.
Tags: Deposits, Extra, Rockeropasiempre