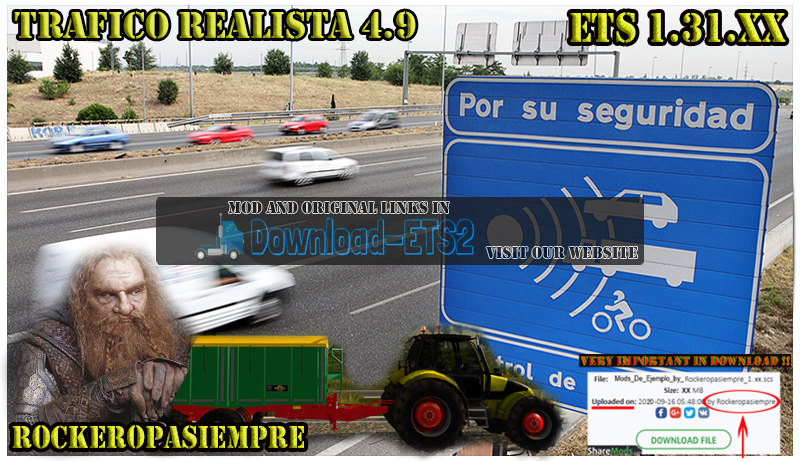 The first and right thing to do is: Give a million thanks to 2 of my colleagues
who have worked with this version of the mod, and have made Beta tester for approximately
About a month. Testing and passing information about the much or little appearance
of the new tractors incorporated in this version of the mod. So, "Wic150 and Fredy",
I reiterate in that million thanks, because otherwise and being sincere,
I just could not have all the necessary information.

- 2 Versions inside the rar file. One (WITH EXTRAS), and one that does not include sounds (NO EXTRAS). Choose one of the 2.
- Mods manager: Always place on top of any AI traffic mod you have.
- Multitude of different colors for AI cars.
- Increase in overall volume of traffic on all roads.
- Less patience in the behavior of AI drivers.
- Descent of police cars
- Compatible with all maps and Dlc's of the game. (Going East, Viva la France, Italy, Heavy Cargo, Special Transport)
- Compatible with all AI traffic mods-packs. (Place the mod on top of the IA packs you have).
- Traffic behavior of the AI ​​totally different from that of the original game.
- Complete information inside the downloaded rar. File READ ME 2 VERSIONS.txt.

- Deleted or modified obsolete files of the previous version.
- Mild reduction in the number of lorries loaded, during night hours.
- Added to traffic IA, 2 tractors, yellow and red. They appear occasionally.
- Added 2 different trailers for these tractors. (You can also see a truck with these trailers attached).
- Speeds of the tractors: Minimum 40 Km / h, maximum 55 Km / h.
- The speed of the tractors has been managed so that the fastest vehicles do not reach them from behind.
- You can also appear these tractors without a trailer, in which case, your speed will be the maximum.
- You can see them parked with and without a trailer at gas stations and workshops.
- Modified 2 horns sounds of the AI. (Only for the EXTRAS version).

If you do not use Traffic Packs, it is easier to see the tractors.
If, on the other hand, you use packs of cars and trucks, for example,
of Jazzycat, it will be more difficult (not impossible) to cross with a tractor,
since these packs include a multitude of light and heavy vehicles.
However, the use of traffic packs does not interfere with the
general behavior of mod. Just keep in mind that you should
Always place the traffic pack, just below this mod.