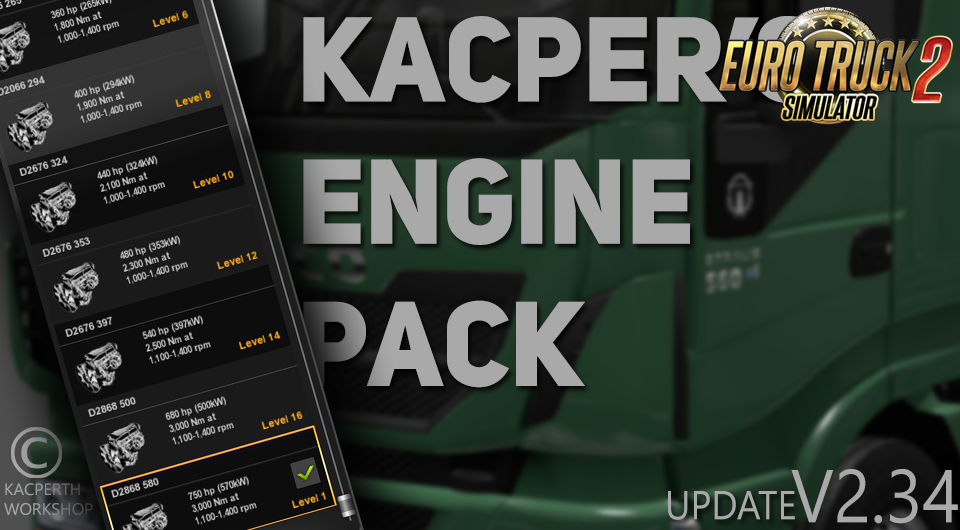 Kacper's Engine Pack Modification v2.34 for Ets2 1.27.x game version
This modification is compatible with all your favourite trucks,
Every update new trucks are being added and bugs are getting fixed.
If you like an engine mod which is realistic then you should try this out.
This is pack that adds a lot of engines to Standard Trucks and Modded Trucks, The mod is being worked on
for the past few months and is getting better and better every update. There is a lot of vehicles
compatible with this mod such as; Scania, Daf, Iveco, Volvo, Renault, Man, Mercedes, Peterbilt, Kamaz,
Freightliner, Honda, Skoda, Sisu, Star, Ural and more !
New version 2.34:
-Improvements for the Renault Range T (RTA)
-New Loading Screen - Kacper's Garage
-Badge fixes for a few trucks
-Added a Heavy Haul Engine for Daf XF E6
-Engine name fixes
-Added Lower powered Engines
Load Order
This mod has its own special load order due to overwriting done to the def files, This mod has
to go on "TOP" of all your favourite "TRUCKS" or else the mod will not function properly.
EXAMPLE : Some things like badges, Sound and even engines could be missing.

A special thanks to Zeeuk1, Rupert Smith and Kriechbaum for the V8 sound for the Scania.
Screenshots Mod