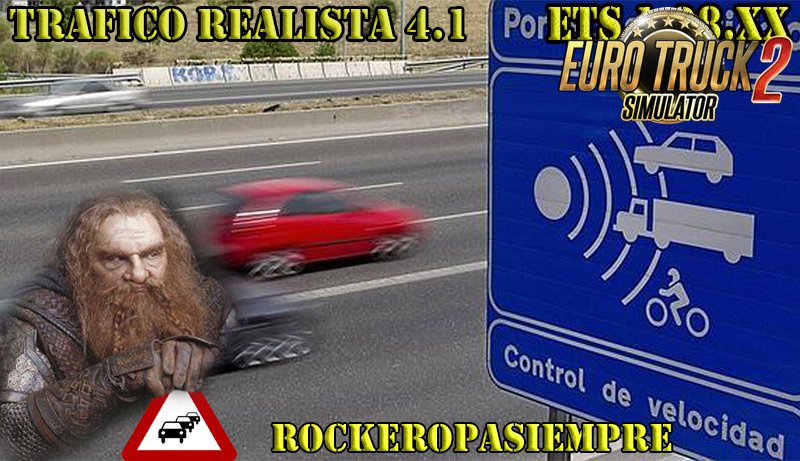 Description about « Realistic Traffic v 4.1 by Rockeropasiempre for 1.28.xx »

– Significantly increased levels of daytime road traffic for cars, trucks, and buses.
– Increased levels of night traffic on the road, for cars, trucks, and buses.
– New rules of regeneration of loads for heavy traffic. This way there will be many more trucks working with
their charges during daylight hours.
– This also affects the night loads, where you will also see trucks loaded, but at a lower level.
– Higher traffic density in cities. You will find traffic in a city higher than before, but moderate in daylight hours.
– During night hours, city traffic is slightly decreased, but you will see trucks working. You will not travel alone at night anymore !!!
– Slightly decreased the number of police cars in traffic.
– All levels have been readjusted in such a way, that there is a greater traffic, but not so high as to produce lag in equipment with few resources.
– The mod is fully independent and compatible with any mod-pack AI traffic.
– In the case of using an AI traffic pack, place these packs always under AI_Trafico_Realista_4.1,
in this way, the behavior of the packs will be managed by the mod.

– Compatible with all AI traffic mods-packs.
– Behavior of AI traffic totally different.
– Complete information inside the downloaded rar. File INFO.txt and README.txt
– 2 Versions inside the rar file. A normal one, and one that does not include sounds (NOT EXTRAS). Choose one of the 2.
– Mod Manager: Always place on top of any AI traffic mod that you have.

IMPORTANT.
ADVICE WITH ANY MOD YOU USE: WHEN DISAPPEARABLE AND ACTIVE MODS, THE GAME
KEEP MEMORY OF IT. RECOMMENDED TO ENTER THE EUROTRUCK SIMULATOR FOLDER PERIODICALLY
AND DELETE THE FILES:
– game.log
– mods_info.sii
– game.chrash.txt (THIS IS NOT SOMETIMES, IT IS ONLY WHEN THE GAME HAS CRAPS ONCE)
IT DOES NOT HAPPEN TO CLEAR THEM, THEY WILL REGENERATE ALONE AND YOU WILL AVOID PROBLEMS OF DEPARTURES TO THE DESK.

- download the mod «Realistic Traffic v 4.1 by Rockeropasiempre for 1.28.xx»
- use WinRAR or 7-zip and unzip the archive;
- copy the file with the extension .scs in My Documents/Euro Truck Simulator/mod folder
- start the game, go to your profile, see the Mod manager and activate the mod.