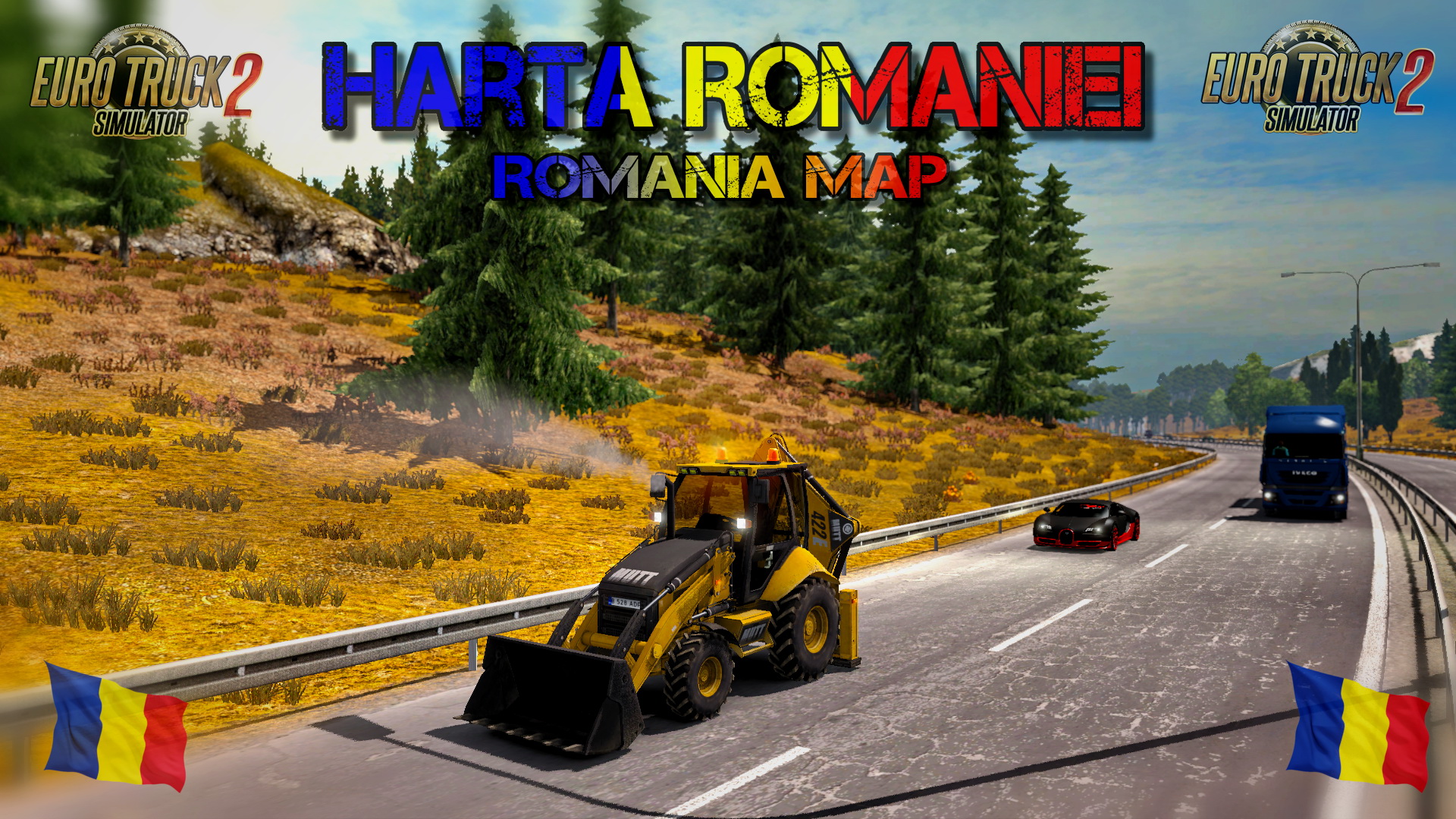 Old Versions
Changes in 8.95
- dlc France is now required.
- new traffic vehicle (using new features)
- new train and carriadge
- tractors with tandem trailers
- reworked all railroads crossing
- changed static gate in company prefabs with animated ones.
- parked vehicles are more often on night then day.
The others mods are those in 8.9 version !!!!!

Changes in 8.9
- map adapted for ETs 2 V 1.26
- added more Romanian vehicle.
- reworked traffic lights (Note: Yet I don't have success to add pedestrian lights).
- some coutry cross roads now have traffic lights (in order to avoid traffic jams).
- corrected some models, prefab and maps issue.
- added coinsurance for repairs (thanks PIVA !!!!!
- Others must be discovered...

Changes in v8.8:
- all vehicle have corrected driver seat position and have passengers...
- reworked many lights
- decresed volume of special ai vehicle sounds
- map default vehicle numbers is 50, so, if you have slow pc, can use "Minimal traffic" mod (10 vehicle) or if have super pc and want traffic jam use "Incresed traffic" mod. Those mods must have higher pririty then map.
- fixed missing accesory and bug in Scania dealer

Version 8.5:
Sesons mods must have higher priority than map.
Some traffic vehicle have specific sound engine.
Hired driver number is increased to 454
Drivers names are Romanian.
Added new models or edited old ones.
Crossroads and prefabs, in winter, behave like roads.
Reworked many models, some new, correction on map, and fixed crashes on beta's due to wheels on trucks and trailers.

Version 8.4:
Some traffic vehicle have specific sound engine.
Drivers names are Romanian.
Added new models or edited old ones.
You can have automatic season changer in game. Details in Season_changer.zip file
Increased traction in winter, and , from now, you don't have anymore, snow in tunnels !
Reworked many models, some new, correction on map, and fixed crashes on beta's due to wheels on trucks and trailers.
Others must be discovered...

Version 8.3:
Romania map require trailer mod to be activated.
At Romanian map, if tha map it is not activated, you must create a new profile, and, at game mod, select romania.mdb
Sesons mod must have higher priority than map.
Some traffic vehicle have specific sound engine.
Drivers names are Romanian.
Added new models or edited old ones.
You can have automatic season changer in game. Details in Season_changer.zip file
If the game crash when loading existent profile, you must create a new profile !!!!!

Version 8.2:
- In this version you traffic updates
- There are new vehicles and two trailers that will put to the test ....
- Special purpose vehicles (ambulance, fire and police) have now functional sounds.
- All vehicles with flashing lights (of traffic) now have real rotating beacons.
- The frequency is lower than vehicles with sound (otherwise you stop speakers)
- If you have used "nospecialsound.scs" is no longer functional, delete and ignore the warning loading.
- There are some corrections "aesthetic" in the map.

Changes in v8.1:
- Changes are made to some models to improve performance.
These moficari are found in almost all ways.
- When winter mode is increased during (the window delivery) of goods.
- Map corrections are made.
- Mod is improved
- Corrections to how autumn textures and mapping.
- New vehicles in traffic You (tandem) with speed correction mode winter.
- I hope that now the exhaust fumes to be OK ....

These are the last (I hope) correction models.
It set the stage for November 3 cities car will be available in future updates
(Buzias, Oravita and Anina).

Changes in v8.0:
- Models are changed from Auchan and Lidl those offered by 50k. (the traffic in the parking lot).
- Adjusts to all trucks, tank capacity add-blue according to the diesel. Valid for Europe !!!
- The integrated wheel off-road package by kamaznik, specially modified for the winter mode.
- They changed the default tires (including quick race) to allow driving in winter.
- They added 2 mods traffic. Minimal those with weak PC. Insane (Insanity) for those with "missiles", who want to have part of "nerves." Both mods works with any map !!!! There should be a higher priority as the map !!!!
- Specific sounds are added to the map companies (those not), and are diversified or changed the "old". Note: Although I managed to find the net some sounds, like we've taken. I hope to be OK ....
- I made some corrections and optimizations map of the models used.
- For those who want change songs from the "garage" I "removed" from Def << / >> World "garage.sii". After the modification, in an update, put in the same place ....

Changes in version 7.9:
- Checks are models whose location was changed with patch 1.22
- Vehicles are added "slow" traffic
- Reduced the frequency of ad index with "beacon". Some specific sound attached.
- Changes the "texture" of roads
- The way the winter rebuilt. Note: The quick jobs do not use automatic transmission !!!! The truck, select the winter tires included !!! Do not use the winter mode than for Romania map !!!!!
- They add texture to your fall fashion
- Some definitions are correct and there are some corrections in map

Important !!!
And maps of Romania and Europe require Trailer pack's guide
Europe is consistent with the original map and TSM 6.2
It is necessary this DLC East and North !!!!

Full version ! (not requiring add- on)
What are the changes from the original map (version 2.0 ) :
- 10 new cities perfectly functional ( Ploiesti , Tulcea, Weeda Company, Viseu de Sus , Lugoj, Jimbolia Cotnari Eforie North Pecica , Sibiu) . You can start new profile of these cities or villages.
- Constanta port is added .
- The ports of Constanta and Tulcea are functional as transport of goods .
- Airport Arad is functional to transport goods .
- Models for Auchan and Lidl are exchanged and functional .
- I corrected models causing crash or lags during the game.
- New route Arad - Brad.
- Jimbolia - Sanicolau direct route .
- Lugoj -Timisoara- Arad highway with toll points .
- Bucharest - Constanta motorway charging points ..
- Increased number of vehicles ( trailers, of traffic , trucks ) , as the number of available cargo .
- Includes oversized trailers .
- Company new (ADP ) to work on the road .
- Coca Cola and The Greenery near Constanta ( arrive by sea ) ! !
- I corrected some errors in the map .
- New Scania chassis R.
- I " edited " acidentele road .
- Weather more realistic .
- Harder economy mode
- Many additional points of loading and unloading ( Bog'art and Kerslake )
-3 New companies added : Real , Metro , Praktiker .
- In cities specific license plate region and beyond can be found all possible numbers , there are numbers leasing .
- I changed some intersections outside the cities ( small roundabout ) .
- The points marked with speed restrictions , traffic respect them , so pay attention to the speed ...
- OK compatibility with V 1.8 of ETS 2 on the new Volvo and Scania Streamliner game .
- It adds a new bank credit line , available at level 6.
Romania map require trailer mod to be activated.
At Romanian map, if tha map it is not activated, you must create a new profile, and, at game mod, select romania.mdb
Sesons mods must have higher priority than map.
Some traffic vehicle have specific sound engine.
Hired driver number is increased to 494
Drivers names are Romanian.
Added new models or edited old ones.
You can have automatic season changer in game. Details in Season_changer.zip file
If you want only a specific season mod, extract it from Season Changer.zip file to mod folder and activate-it !
Increased traction in winter, and , from now, you don't have anymore, snow in tunnels !
Crossroads and prefabs, in winter, behave like roads.
Reworked many models, some new, correction on map, and fixed crashes on beta's due to wheels on trucks and trailers.
Important ! Due to compatibility with dlc to start a new profile must select the game mode<<romania.mdb >> otherwise you will not have the map .
Check if the game mode selected appears <<romania.mdb >> If not, you have to start a new profile.
Since present several new models , it is recommended PC memory as much . For those who have not , reduce the resolution and / or graphic details to avoid memory problems .
To use the additional traffic mode , depending on resolution and graphic details , it is necessary to have at least 8 GB RAM installed in the system.
Tested on game version 1.28.x
Screenshots Mod 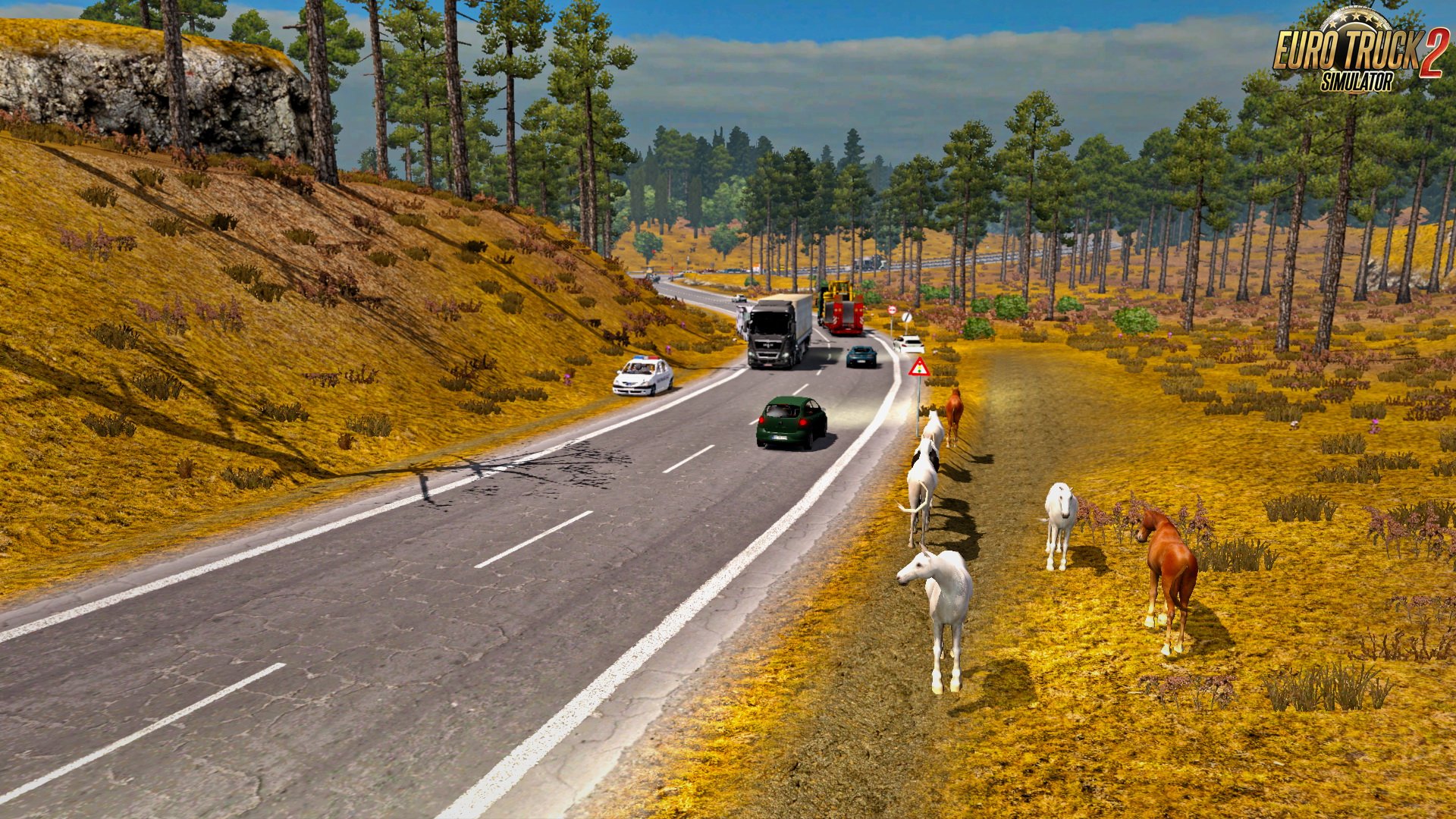 - download the mod «Romanian Map v9.2 (1.28.x)»
- use WinRAR or 7-zip and unzip the archive;
- copy the file with the extension .scs in My Documents/Euro Truck Simulator/mod folder
- start the game, go to your profile, see the Mod manager and activate the mod.
Tags: Romanian, Map, v9, 28