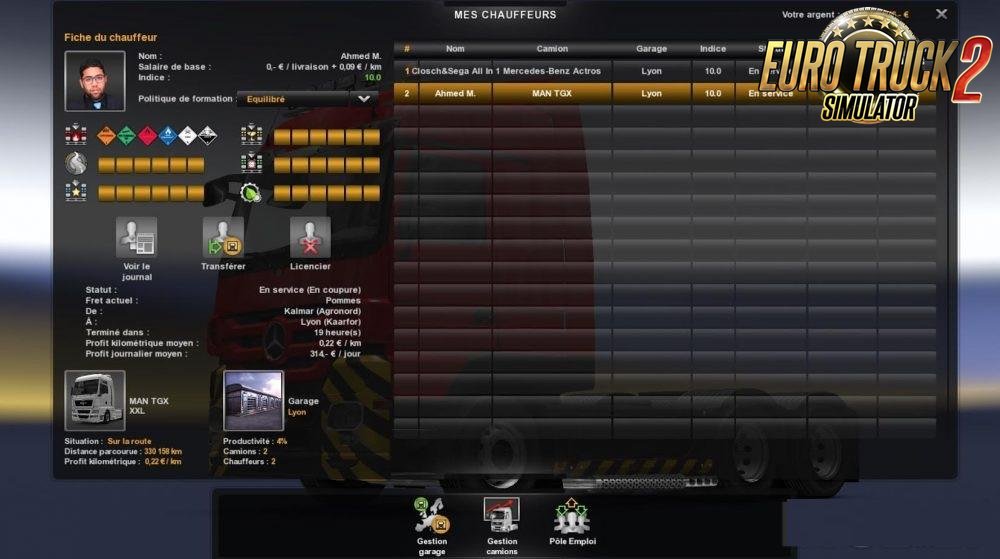 Realism v7.2 for Ets2 1.27.x game version
Features:
With Realism version 7 you have:
854 European radios, you have to move the file “live_streams.sii” in the file “Euro Truck Simulator 2”
(attention, certain radios do not work anymore).
Available on-line purchase without buying of truck.
Improvement of the sound of the rain and of the thunder (thanks to American-Express).
No cool of hiring.
Increase of the speed of all the vehicles.
Increase of the number of kilometers in the capacities of long distance.
Correction of data on certain engines (thanks to MichelP).
Starting up of the game at 6 am in the morning with 176 000€.
Decrease of the maximal ceiling of loan.
Duration of authorized overdraft crossed in 30 days.
Much longer durations of refund.
Expenses of abandonment of a trailer reduced to 1 200€.
Expenses of the drivers are more realistic.
Possibility of making loans without any mission of made.
More realistic rises of sun and night.
Modification completes of systems of the points of experience.
Modification of a part of icons (thanks to James Le Bavard).
Modification of the sum of the loans.
Modification of the parameters of the camera.
Opacity of the night increased in 90%.
Possibility of making loans without any mission made.
Price of accessories decreased in 90% on average so that they are more realistic (even those of the DLCs).
Price of the fines fixed according to the French regulations.
Price of the more realistic cargoes.
Price of the reduced garages of 90%.
Realistic price of the fuel in all the countries (week 21).
Reduction of the consumption of the drivers in the kilometer, between 0,2 and 0,4 liters.
Reduction of the probability that a driver has no trailer in 0%.
Reduction of the damages caused by a driver in 0%.
Reduction of the price of the diesel oil in garages crossed in 20%.
Reductions of the deadlines of delay (8 hours for the non-urgent deliveries,
4 hours for the normal and the 1 hour for the urgent against 2 days, 12 hours and 4 hours).
Occasions of trucks in 75% of their initial prices.
Interest rate of the loans reduced to 5%.
Exchange rate of the realistic currencies (week 21).
Weather of modified rest (45 minutes of break every 4:30).
The past average speed of the drivers from 67 to 80 kph (so your drivers drive faster).
Installation:
Put the file “live_streams.sii” in the folder “Euro Truck Simulator 2”
Put the file “Réalisme V7.2.scs” in the folder “mod”
If you wish to contact me, here is my address: ficfic@orange.fr
Screenshots Mod

- download the mod «Realism v7.2 for Ets2»
- use WinRAR or 7-zip and unzip the archive;
- copy the file with the extension .scs in My Documents/Euro Truck Simulator/mod folder
- start the game, go to your profile, see the Mod manager and activate the mod.
Tags: Realism, v7, for, Ets2