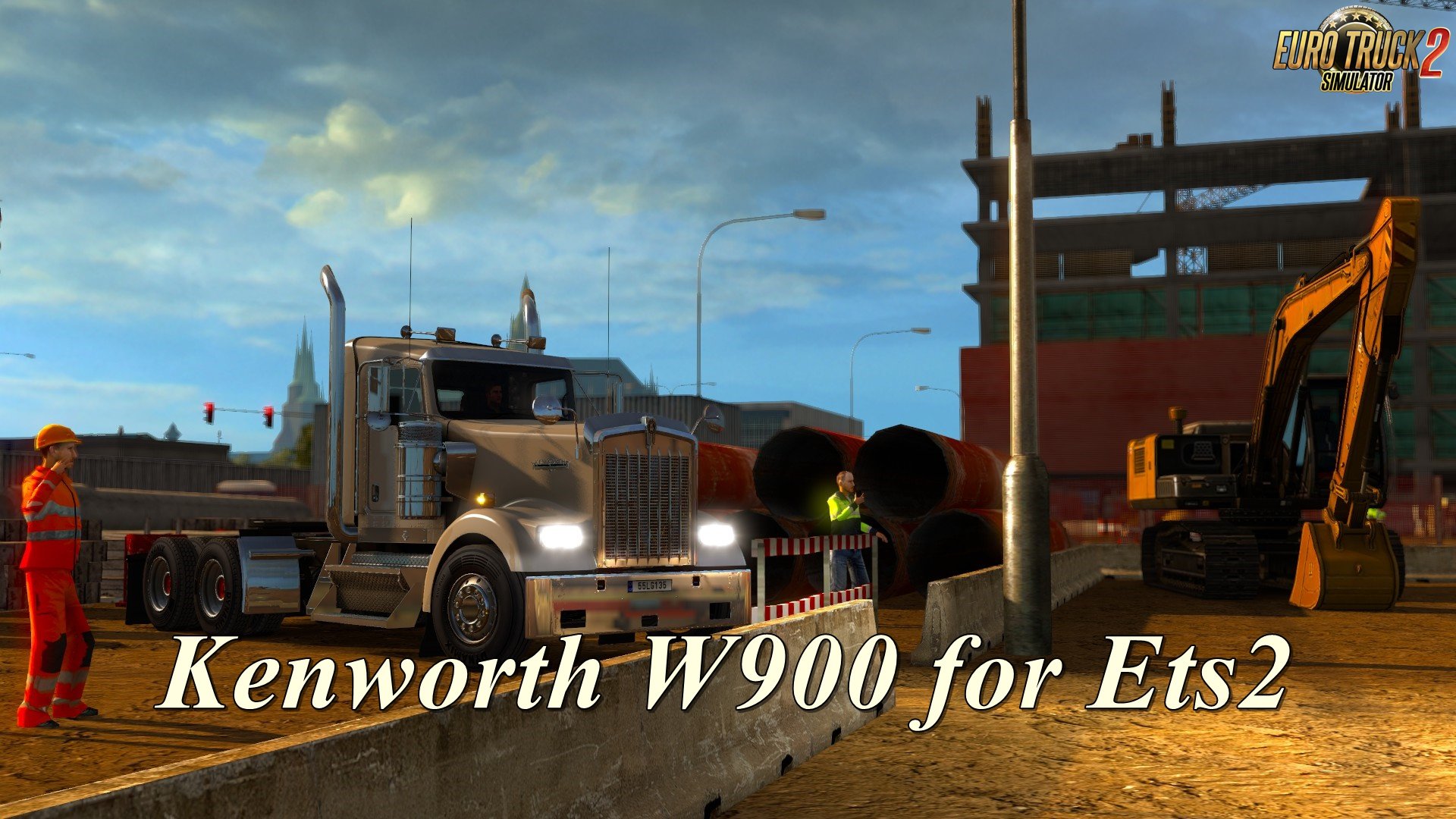 Download Kenworth W990 for Euro Truck Simulator 2 (1.35.x and up) game
The mod was supposed to be just a fix for Frank's w990 but at some point I decided to do a complete overhaul.
I removed everything (materials, textures, definitions, sounds, paintjobs - everything :)) from the mod and
started with plain meshes. I did a lot of optimizing at this stage so the truck should not slow down the game too much ;).
Lots of details which were in meshes is now in normal maps. I also replaced some models with
lower-tris-count custom made ones. Since I made all the def files from scratch and also changed some
locators and added new ones, you need to sell the old w990 before you activate this mod.
Features:
- the truck can be purchased at level 0 but also supports player progression (level up to unlock more parts),
- parts prices are set to match SCS trucks,
- 9 engines (5 varinats of Cummins X15 and 4 variants of PACCAR MX-13) with real specs and
awesome sounds by Kriechbaum. One of PACCAR engines is multitorque (455MT) with higher torque
in overdrive gears (gear ratio < 1.0), for instance 8L and 8H in 13 and 18 speed transmissions,
- 13 transmissions - 5 manual, 5 automated and 3 automatic - all based on real specs,
- the shifter inside the cab will change based on selected transmission and will show the
proper gears layout for selected manual transmission (10, 13, 15 and 18 speeds),
- 3 cabin options - day cab, 40-ich flat top sleeper and 76-inch mid-roof sleeper,
- 5 chassis variants - all 6x4 with different wheel bases and tank sizes,
- 5 interior variants,
- 5 customizable painjobs and a few predefined paint colors,
- mod includes a custom made small light pack so you can fill up all the light slots without the need to install separate light packs,
- custom made CB radio (Cobra 29 LX) with wobbling cord ;)
- the truck is available in quick jobs (also in heavy and oversized jobs),
- support for SiSL Mega Pack and SCI steering wheels (separate mods),
- support for advanced coupling,
- support for trailer cables,
- accurate shadows and collision boxes.
Changelog (since I removed everything besides meshes (and some meshes as well),
most things were made a new - here are only the most important changes or the ones I can still remember):
- optimized meshes,
- all new textures and materials (not a single texture from the old mod left),
- removed all definitions (accessories, cabins, interiors, chassis, engines, transmission, sounds, etc.) and made new ones,
- removed all sounds and integrated Kriechbaums x15 and mx13,
- removed animated doors,
- remade all the interior animations and added a few new ones,
- rescaled interior to match exterior (interior was like 1.2x bigger than exterior),
- moved interior to match with exterior 1:1,
- removed high-roof sleeper - there is no such option for w990 and looks ridiculous,
- merged day cab and sleeper models into single model with variants,
- merged chassis models into single model with variants,
- merged interior day cab and sleeper models into single model with variants,
- replaced rear suspension and axles models (they were the same as in Mack Anthem) with custom made AirGlide 460,
- replaced rear lights models (again the same as in Mack Anthem) with custom made models,
- replaced rear full fenders with custom made ones,
- replaced engine and front suspension models with low poly models from w900,
- added 5 new paintjobs - removed old ones because of UV change,
- unwrapped UVs of all truckpaint part to create a new, better template for skinners,
- made the sleeper cab extenders a separate accessory,
- changed shape of the back of sleeper roof so that is has a round edge/corners,
- made cab panels a separate accessory,
- fixed ext_interior model - there were lots of holes,
- changed size of interior sleeper windows to match exterior model,
- added curtains and custom made lamp models to the sleeper interior,
- completly reworked day cab interior back wall and roof (the roof is from t680),
- removed all shadow casters of all parts and made new ones,
- removed all colliders and made new ones,
- added colliders to main mirrors - now you can hit thigs with them so be careful ;),
- added collider to the bullbar,
- added 2 sunvisors from t680 and added light slots to them,
- replaced hi-poly front bumpers with w900 front bumpers,
- added light slots to front bumpers,
- added a custom made light pack,
- remade day cab exhaust pipes,
- reworked sleeper exhast pipes to not collide with the cab and to not cover the doors,
- removed all chassis variants and made new ones with wheel bases based on real trucks,
- and many more....
Tested and work in 1.35.x and up.
Screenshots Mod

- download the mod «Kenworth W990 for Ets2 (1.35.x and up)»
- use WinRAR or 7-zip and unzip the archive;
- copy the file with the extension .scs in My Documents/Euro Truck Simulator/mod folder
- start the game, go to your profile, see the Mod manager and activate the mod.
Tags: Kenworth W990 Ets2