This mod and addons do not use additional vehicles types.

I must use special parameters for traffic_data file, because SCS did something wrong
with traffic spawn algorithm, so now this mod is not working as I want to see it in game.

Now I made base mod and some addons for it.
Base mod now do not contain tractor in traffic by default, now it in separate addon

Known problems
- Sometime you can drive on empty roads, even I set 60 cars and 18 trucks, and I don't know where it's all?
- Some vehicles can stop without reason, rare but it happens
- Vehicles can quickly change lanes without reasons
- Traffic still slow down near small gas stations, because SCS still not fix priority lane for this prefab
- Some of rare vehicles like a tractor or emergency cars can spawn too often, after game restart this issue may be fixed or not.

Also pack contain addons
- doubles trailers in traffic in Scandinavia, Germany, Belgium, Neitherlands and in France and Italy with skins of it DLCs
not additional vehicles types used for this addon. Addon priority not matter.
- harvester (with low probaility) and tractor with beacons lights and smoke.

This addon must have high priority to base mod. Must spawn very rare. DLC France is required.
- Emergency cars like a ambulance, firetruck, escort vans and roadworks vans in traffic with beacons lights on or off.
this addon uses new "overrides" and still not use additional vehicles types. Priority - not matter.

empty log trailers and so on. Priority not matter.
"DLC - High Power Cargo Pack" and "DLC - Schwarzmuller trailers" is

required for this addon (dlc_dependencies added to manifest)

Be warning.
If you use SiSL traffic trailers pack, you may not see this SCS trailers in traffic,

because SiSL pack contain more that 1100 trailers, my pack have only 7 tailers with

fixed speed on some cars or vans (not all)
Tourliner bus spawn ratio is fixed, so you can see it everywhere.
Fixed length or trams in DLC France again. SCS was fix trailer connection with variants.
Fixed trains in DLC Italy, where SCS is added cargo train on tracks of fast train and it looks stupid in game.
Trains and trams have sound.
If you use Drive Safely "Sound fixes pack" it must have high priority of my base mod. 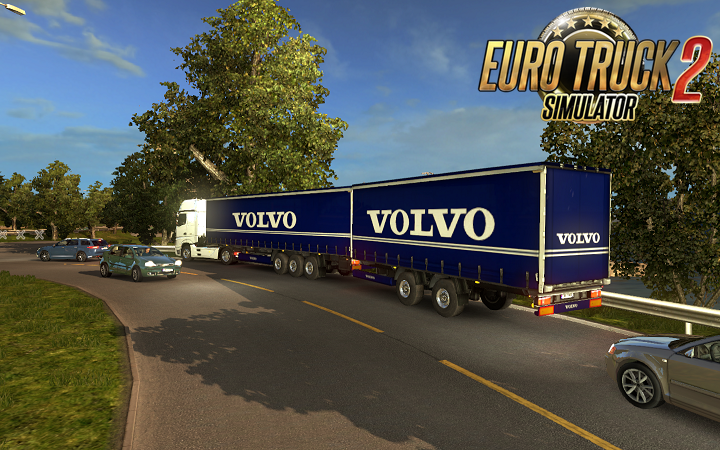